With work and a new puppy arriving on 22nd December, this was likely to be my last match of 2017, Clevedon FWAC a club I had a long and happy association with, but just don't seem to get to their matches anymore, so it was good to get along and support the 2017 Xmas match.  Tony (Rixon) was also coming along, but as I was on-call, I had too travel down by myself, just in case I had to pack up and deal with any issues at work.

The draw was in the Bridge Inn at Yatton, that pub brings back some memories of Clevedon Veals team meetings, that inevitably turned into full on drinking sessions, given the members at the time and our proclivity to enjoy the genial atmosphere of public houses and partake in regular 'lock-in's'.....

Enough of the memories, even if some of them are a little hazy, all I know is that I could not go fishing now, after some the sessions we used to have and still turn up and fish!!

I drew peg 11, I was fairly indifferent to it, as I haven't been to Acorn for a while, the one thing I thought might not work in my favour (or Mark's) was that Viaduct winter league team mate Mark Broomsgrove drew 12 and with both pegs in you are fishing to the same corner point of the island.  At least having Mark on there meant we both had an idea of the etiquette required, so kept a respectable distance away from the apex of the islands corner.

I had put a method rod in the van, but decided that it could stay there, so 4 topkits onto the roost, one set up to fish the shallow water tight across, more in hope than expectation, given the temperature, which saw the lake covered with cat ice at the start, although it was melting whilst we set up.  Another to fish down on the second shelf, I spent ages plumbing up and it was virtually impossible to find a level, flat area to fish on, so I would have to rely on dragging the bait onto the shelf.

A rig for full depth which would do for short and across and finally a rig for down the LH edge, which at over 2' I did think I would catch there at some stage.  Bait tray was live and dead maggots, and a few pellets, as well as a couple of slices of bread, no need to complicate things.

Starting on bread, tried dobbing it at various depths, both across and down the edge, but not so much as a twitch on the float.  Mark on 12 had lost a couple, so I fed a few maggots and went out onto the 3rd shelf, I had a couple of tiny indications on the float, but it took until nearly 12:00 to get a carp in the net, that was about 4lb, 30 minutes later I had another, a bit bigger, I was now expecting to get a few more, but it took until 15:10 to get another, this was a decent fish and put up a spirited fight on 0.12 and a 18 Guru F1 hook.  A shade over a double I guessed.

Well come the way in, it transpired that my section was the second worst for weights and I missed out on the section money by 2lb, as the shameless :)  Tony Rixon won the section with 23lb which was 5 carp and a skimmer, 2 of the carp he gleefully admitted were foulers.....  My 3 carp went 21lb.

It was back to the Bridge Inn for results, raffle and prizes, good to catch up with some old friends, especially Kev Perry who was having an operation on his back a couple of days before Xmas, hope it went well mate.

Well done to reluctant commercial attendee Ivan Currie for winning the match with 70lb or so.

Roll on better fishing weather and I hope all my angling friends have a good Xmas and New Year, see you in 2018.

Decided to fish this league as the dates fall OK with work and I planned to treat it as a silvers league, given that Ken pays silvers in the matches and overall (personally I disagree with this, as I believe it can affect the overall league and section points, but its not my league, so I'll go with the rules).

I did chuck some pellets in my bait bag just in case I drew an out and out carp peg and they were having it, although I wasn't convinced the sport would be manic after the cold weather all week.

I never seem to have that knack of mentioning a peg I fancy and then drawing it (how do some people do that so often.....), but I was thinking positive thoughts for 36, 5, 22 or 42, as I thought they'd be good pegs for an all out silvers attack.  Couldn't believe when 33, a favoured winter carp peg came out of the tin.  That meant setting up a pellet rig as well as maggot /caster rigs and as its an end peg, a rig to fish for perch along the end bank, which was only 6" shallower than the main part of the peg and with no island to fish to, I couldn't find any area of shallower water or a shelf, which even with the low water temp, its still nice to have the option, as the water is sometimes warmer over the shallower shelves.

On the 10:00 all-in, I started at 16m to the RH limits of my peg and fedd a few micros and fished an expander on the hook, 15 minutes and nothing.  I then switched to 13m slightly to my left toss potting a few maggots in and double maggot on the hook, I did manage a see through micro perch from here and that was the only bite.

I tried a line at 16m just in fron the aerator, this was equally as dead. Russ Peck on 32 opposite was foul hooking and fairly hooking carp, whilst for all intents, my peg was empty!  At 12:00 I had a look up the edge over some casters with a segment of prawn, I had a perch over 1lb, straight back in, another bite and lost one bigger, back in again and had one over 2lb, Iwas hopeful of a few, but that was it, no more bites from that line the rest of the day.

I managed one more micro perch, one small carp and a small hybrid for the rest of the day, whilst Russ caught carp opposite, I dropped the negative feeding and started pinging casters to see if they would come across, but to no avail.  I did pot some micros and corn in at 16m in fron the aerator and I did hook a fishfrom there on corn with 5 mins to go, but it came off.

My 5 perch (two of which didn't make an ounce combined) went 5lb and the one lonesome carp went 3.15, I think this was next to last in section and no better than halway in the silvers, Tony Rixon had a cracking net of roach from peg 28, I tried desperately to catch one but failed miserably.

I used to enjoy winter fishing, but I can now see the attraction of putting the tackle away from November to March......

Paddy Curry had advertised this match on Facebook, it seems if you aren't on Facebook at exactly the right time (or glued to it!!) its easy to miss out on matches on there now, as they sell out so quickly.

It had been cold all week and my bait order of 3 pints of caster looked wildly over optimistic when I picked them up before the draw, even considering I was intending to use them on Sunday as well.

Peg 3 came out of the draw tin, can't complain about that and as I was walking passed middle lake to my peg, I wasn't disappointed that I hadn't drawn on there, it was gin clear and I could see the bottom a fair way out.

I feda line just short of 16m with 2 balls of GB and came shorter and started at 11m with loose fed caster, I could catch tiny roach and hybrids on this, so felt I needed to put some GB in and leave it, hoping the better skimmers would come over it.

30 minutes on the feeder produced some unhittable roach bites and nothing else and it was looking like another tough day was in the offing.  With hindsight being a wonderful thing, I think I should have carried on fishng a caster line with no GB, as over the GB all I could catch was the occssional 2oz skimmer on pinkie, the bigger fish seeming reluctant to feed.  Even at 16m I could see the fish flashing when striking into them, so I guess each one hooked, scared his mates off for 10 minutes, which is about as long as I was waiting between bites.

If I could fish the match again, I would have stuck to loose feed and have kept catching the tiny roach and hybrids for as long as I could, I ended up with about 4.10, which was mainly small fish......

Another round fishing this as a stand in, the angler I was deputising for was not in the running for the overall positions, so a positive mood and fishing for a win.  123 came out of the draw tin, the right end was the consensus of 100% of those who enquired as to my location for the day.

Opposite on 119 was travelling partner for the day, Tony Rixon, who was also hopeful of getting a few from there.  Plenty of time, so I set up a waggler, a small cage feeder, a rig for down the edge to hopefully tempt some of Campbells Perch, a couple of rigs to fish at 14m and 10m and a double bulk rig.

I did expect to catch some roach at the start, but it wasn't to be, a look round and it seemed to be fishing hard, I can't pad this out at all, I had 2 roach on the pole and that was it, I swutched to the waggler and had a roach, but that too was bereft of fish, the edge where I was hoping for perch, hybrids and maybe a tench, didn't produce one single bite all match.

A switch back to the waggler brought another roach, then a tench and a skimmer, I thought things were looking up, but no, that was it, my sum total for the day was 2.10, I did lose one fish late on, hooked on a throwawy line at 5m, I think it was a decent skimmer, but it was irrelevant in the scheme of things.

Wrong end of the lake it would seem today, a real struggle. 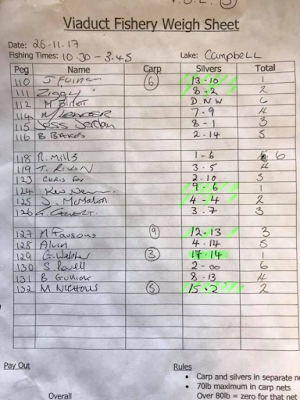