I couldn't make all the dates of this popular and enjoyable league, but was asked to stand in for good friend Glenn Calvert, as he was at Whiteacres.

Travelled down with Tony, so a breakfast, and a putting of the world to rights soon made the journey pass.  The day started cold and bright, but looked so much better that the miserable cold of yesterday.

There had been a bit of a panic in the South West for casters this weekend, as the caster maggot wasn't turning and that had led to a bit of a shortage, but thanks to some sterling efforts by local shops and Viaduct, everyone had had enough to fish the match.

Most wanted avoid Campbell as the carp were likely to be active, Cary was the favoured option, well I managed to avoid Campbell, but for the second day running I was in a corner, very restricted in what I could do on 53 lodge.  I had got up early and set up a waggler and a feeder rod, but these would be staying in the bag. 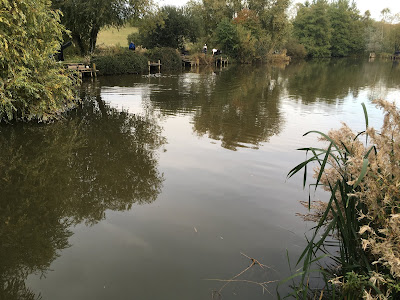 Peg 53 left view into the corner 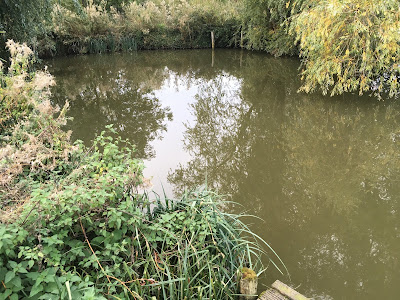 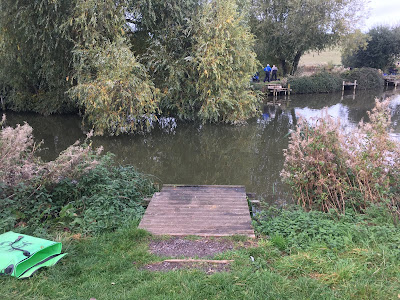 Nice and simple approach, micros and soft pellet to the gap in the trees and some GB, dead maggot and caster as far as I dare towards the open water without encroaching on Mike Nicholls on 73.  It was about 3 or 4" deeper under the trees, I had plenty of time to set up rigs to cover both depths.

For the open water, a 0.4g HB Frostie and another HB float for a double bulk rig, I did set up a rig to fish down the LH edge, maybe for a bonus hybrid or perch, but I wasn't too hopeful, as the water is clearing and with the temp down to virtually 0°C overnight, it was just a throwaway line.

I started fishing into the gap in the trees, fishing pretty negatively, just feeding a few micros and had a reasonably decent start, 6 or 7 skimmers in the first hour, one about 2lb and a few hand sized.  This died off and I did try a golf ball size ball of GB to see if it would restart it, but that was to that for the skimmers.

The sun was out, I was fishing in a T shirt, this weather is mad, yesterday I couldn't feel my fingers, today was glorious, not ideal skimmer conditions, but after yesterday, I wasn't at all upset by that!!

I had been a lot more positive on the line towards the open water, but only managed to hook one small skimmer over the GB.  The rest of the match was spent picking odd roach (including an immaculate specimen that was 12oz+) on caster, but they wouldn't settle.  I caught everything on the light strung out rig.  I was certain that I didn't have double figures and during the match I had a bit of running conversation with Mike Nicholl's who also struggled, I'd say we are both capable silvers anglers and we ended up within 8oz of each other (different sections though).  I was fairly sure I'd be near the bottom of the section, but was surprised to end up 3rd with my 11.14.  Normal service resumed today, as I was in the worst section, not sure where I could have got anymore from, so Glenn will have to be happy with 3 points, better than I thought at the start.

Tony ended up ounced into third in his section, so it was a sulky trip home with both of us disgruntled, exacerbated by faulty traffic lights at Pensford and a lorry causing chaos on Pensford hill..... 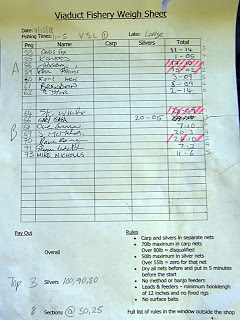 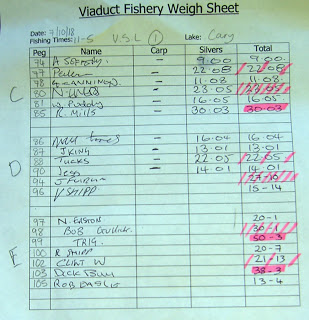 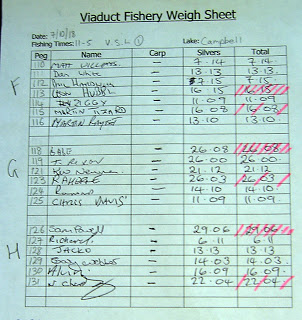 A bit of a late entry into this one for me, partnering Jon Howell.  Had I known what the day would turn into I might not have bothered!!!

A really frustrating drive down, why, oh why do all Nissan Micra owners drive at 25 in 30 limits, 33 in 40 limits, 38 in 50 limits and have no concept of the national speed limit sign.....  Other annoying small cars also fall into this trait.

Into the drawtub and out comes 55, not a peg I'd run to and most others would say the same, in a pole only match it wouldn't be too bad, but it is hemmed in by 54 and 49, so if the fish don't rock up down the edge or short, you can't go looking for them too far out.

The rain was coming in at an angle on the cold NW wind (which was forecast to get worse), an umbrella was unlikely to protect me, that was if it would even stay in one piece.  I left as much kit in the van as possible, which included the waggler rods, I did set up a straight lead and a method, to fish short, in light of the forecast.  As it was I decided that my Multi Margin would be more than long enough for the distance I could fish out, with the wind pushing hard enough to limit to 2 or 3 sections at most.

Rigs would be simple, a pellet rig for 2+2 at the bottom of the shelf, one at similar depth for off to the right for meat and another for about 4' off the bank , into a couple of feet of water.  On the all in I started on the pellet rig and was catching on 6mm banded pellet feeding 4mm pellets, not at an amazing rate but after half an hour or so, I thought I was on target for 20lb an hour, I thought that with a good last hour or so would be decent points.

The fish were all in great condition, but small, 2lb average I'd say and after the first hour the wheels came off and trundled away...….  The bites really slowed down and I tried slightly further out, but the wind was making that a fairly pointless exercise. I went out 20 turns on the bomb and pellet where I'd been feeding, but not so much as a liner, a switch to the method brought brief hope, as I had bites and 3 fish landed in 4 casts, then nothing.

The edges were very slow, just an odd bite on meat, but the fish were of no better stamp.  By now I was cold, very cold, I was involuntarily shaking, not just shivering, but shaking, if it had been an open I would packed up and gone home.  I reckon I had put my 20lb target weight in the net in the first hour and by 3pm  (4 1/2 hours in) I had clicked 46lb, so way off target.

The last part of the match I spent back on the 2+2 line fishing pellet and the rate did climb during the last hour, but still no quality fish, I reckon the biggest I had was not much over 3lb, whereas there were fish over 19lb caught.  The net I had clicked at 46lb went 55lb, difficult to judge these smaller fish as they are a variety of shapes. The net started with an hour and a half to go went 31lb, so bang on target, but nowhere near enough to compete in the section, not sure what I could have dome different, staying home in the warm would have been the best option!!

Well done to everyone for staying and weighing in, in what were the worst conditions I think any off us had fished in, in October.

Poor start for me and also my partner, so a lot to do to pull this back to a respectable result. 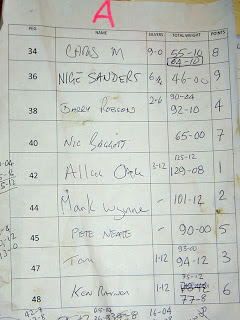 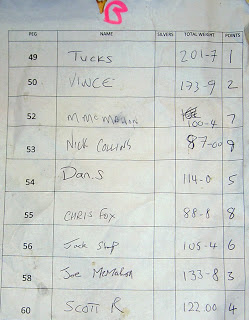 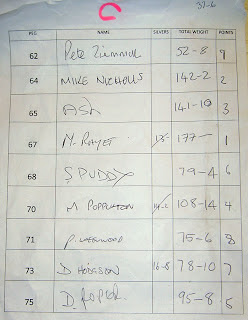 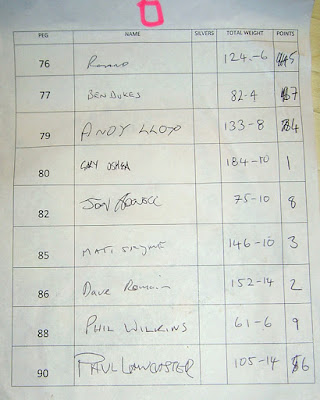