Firstly, whilst it's all Bah Humbug to me, I'd like to wish any one who actually reads through these incoherent ramblings a Merry Xmas and all the best for 2019.

I will admit, of late its been a bit of a head scratcher trying to write anything meaningful in this blog, I started it to act as a diary and aide memoire for myself, had some encouraging comments and some critical ones, so decided to keep it going.  For some reason, for part of this year I seem to have lost my way, I have suffered a bit at the drawbag, I have undoubtedly failed to make the most of some of the pegs and there is no doubt, that to fish the open circuit nowadays you have to be at the top of your game at all times, there are too many good anglers who will punish you if you aren't.

Time for a bit of soul searching over Xmas and the New Year, maybe a plan for next year, concentrating on a few goals, rather than meandering from match to match, venue to venue.  I will be swapping jobs soon, to a Monday - Friday role, freeing up my weekends, which will allow me to get back into (spaces allowing) some of the series I have been forced to drop out of.

Anyway, onto todays match, 70+ fishing, so spread over Campbell, Cary, Lodge, Match and Spring lakes, for those who aren't familiar with the layout of Viaduct, it looks like this.. 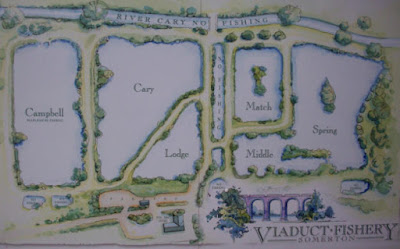 I wasn't sure where I wanted to draw, but I did want to avoid Campbell, it is an amazing lake, consistently throwing up big weights and consistent fishing, with the exception of the months either side of Xmas, the fish tend to ball up, someone or maybe three or four have a great day and others struggle, even the skimmers seem to switch off, as they go and sit with the ball of carp.  Recent results show the carp are balled up at the opposite end to the river, so pegs 110, 132, 111 and 131 - obviously a draw there would be OK, but the rest of the lake would likely be hard going.

I can't say I was surprised when I drew 118, which is end but one peg on Campbell, but the 'wrong' end, I couldn't get near here in the summer!!!  I did have one hope, 117 wasn't in (not usually in) and there are a few brambles to fish to, these were cut right back last year and have not regrown as prolifically as brambles often do, so the cover is limited, but you have to hold onto some hope.

I had come to be positive and fish to win, so had left silvers rods etc at home, but I had brought some caster and maggot, as well as bread corn and meat.  A lead rod set up, this would do for popped up bread, meat or corn, a waggler for corn initially and two rigs to dob along the edge, one for bread and one for caster/maggot. An open water rig for carp (wildly optimistic for me, I know!!) and just in case, a silvers rig.

I spent 40 minutes looking for a carp along the edge, with bread at various depths and then maggots, not as much as a tremor on the bristle, I got the feeling there really wasn't anything there.  Nick Chedzoy on 116 had a carp on bread to the tree/bushes to his left, but there was little other action on the lake.

I tried the bread on the lead, corn on the wag and the result was the same, motionless tips and wagglers resolutely visible, not even the slightest hint of a fish being out there.  Given the known facts that the carp were up the other end, I swapped over to the silvers rig, it wouldn't do me any good, but at least I could get a few bites, it was tough going, I'd fed two lines at 14m the usual 10 and 2 o'clock, the 10 o'clock line was the more prolific, but prolific has to taken in context, bites were hard to come by and after catching a fish (roach or skimmer) that would be it from that line for 10 minutes.

I did set up a new line at 6m by the tree branches that dip into the water, but with no leaves, they offer no cover or feature and a couple of small roach were the total reward for that.  I kept going back along the edge, fed a caster line there looking for perch and a maggot line for carp, the sum total of my efforts there was one roach on the maggot line.

I put 6.02 on the scales for absolutely nowhere, as expected 110 and 132 were 1 & 2 on the lake, but they were beaten by Mark Wynne on Lodge who put 179lb on the scales for the win, with Lodge also providing Gary O'Shea with 45lb of simmers for the silvers win.  well done to all those who framed and won their sections, you still have to catch them.....

I stayed and got my wine and chocolates, thanks to Steve, Helen & Matt for another good year at Viaduct, thanks for the beer and mince pies, I can only hope my drawing arm and mental approach both improve in 2019.

First match after an enforced break of nearly 6 weeks, work, some debilitating virus and then a nice holiday in India - so after enjoying wall to wall sunshine and temps up to 35°C, its been a bit of a shock coming back to this grey, dismal and wet weather.

I did consider going to Acorn yesterday, but saw the weather forecast and whimped out, right decision looking at the result and seeing how much it rained.

Onto today, minimal prep, took some maggots out the freezer, along with pinkies and checked my worms, they seemed alive, so all well and good.  I did have to wash the mould and fungal growth out of my bait boxes, but that was it for prep, nice and easy.

Only 10 booked in, but some good quality competition, so a decent draw was required, I had no complaints when 18 came out of the tub, off I went, expecting to catch a few skimmers on at least a couple of methods. First rod set up was a 10' wand, to fish a cage feeder at about 20m, with the option to unclip and go closer to the island if necessary.  Next was two wagglers, one peacock waggler to fish right across to the island, plumbing up it was nigh on full depth within a couple of feet of the island.  The other with a Drennan glowtop waggler, the shape of the old canal blue, these are lovely sensitive floats for caster fishing.

3 topkits to complete the set up, one with a HB Frostie (0.3) to fish at 14m over some GB, a NG Gimp to fish caster over caster at 7m and another HB pattern to fish double caster sport in front of the tree/brambles to my left - hoping for a big perch or two.

Bait tray would be simple, GB, casters, maggot and pinkie and a tin of corn.  On the all-in, I put one ball of GB in at 14m and started on the feeder, 3 casts and 3 bites indications with nothing to show for it, 4th chuck the tip twitched and a 5oz hybrid was netted, the bites dried up after this and I had one small roach in the next 20 minutes. A look on the pole next and a small skimmer, then a roach, then nothing.  A switch to the waggler and caster brought a few small fish, roach, rudd and another small skimmer, but it wasn't possible to get more than a couple of fish from one area.

I just kept rotating lines to put odd fish from micro rudd to 5/6oz hybrids in the net, the perch line in front of the tree was devoid of fish, but I half expected that given the water clarity, it was too slow to be doing any good in the match.  Steve Kedge to my right and the guy to my left was struggling as well, yet Martin on 16 was catching steadily, not too far out either.

Last hour I decided to sit it out on corn across, I had 5 better stamp fish doing this to the island and bumped a couple!!!   After bumping each on it took at least 10 minutes to get a bite, I did have one over 2lb, but that was 5 minutes before the all out, I think the light just went too late for the bigger skimmers to switch on.

I beat either side, didn't get wet (bonus) and that sums up the good points, downside is that I am not sure what I could have done differently, it just seemed as there weren't many fish there. Well done to Martin on the win. 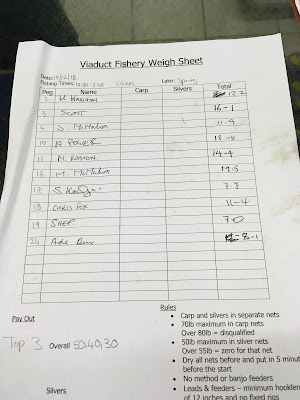