Not knowing this venue very well, I didn't have any preconceived  idea of where I wanted to draw, so I was neither disappointed or elated when peg 31 revealed itself.  I had tried to keep things simple and had brought 6 and 8mm pellet, 8mm meat and some paste ( I did weaken as I was loading the car and put 2 pints of dead maggots in as well, but fed them to some grateful ducks).

I set up two wagglers, but in reality, for the second match running, a strong left to right wind was going to affect my fishing, so they saw little use and not a bite was had on them.  4 topkits set up, a MW diamond to fish pellet on a shelf which is just under 12" shallower than the lake bed, it's in front of a willow tree that comes out into the peg off the end bank at about 11m. A MW cookie for shallow, but that didn't get used, a Daiwa paste float, with a .75g olivette about 18" from the hook, as the wind was causing a considerable tow in the opposite direction and a rig to fish meat in the margins and right in under the willow tree, all of which were about 3' deep.

Meat proved useless, all I had to show from trying it was two tiny skimmers, I tried it regularly throughout the match, to no avail, likewise the margins, they produced nothing except the previously mentioned two tiny skimmers.  I started on the shallow waggler out towards the aerator, but the wind rendered it a pointless exercise. I dropped in over the shelf in front of the willow with the pellet rig and a 8mm banded pellet and managed several small carp, before landing an eel which was well over 1lb, a first for me catching an eel on pellet. As the fish were up this shelf, I assumed they'd be in the shallower margins under the tree, but this was a lesson in not assuming, as I only had two fish from here, on a hastily assembled shallower paste rig, as meat was so unproductive.

I had a run of better fish up to 10lb on the bulk down paste rig, but the wind was making it difficult, I tried a couple of lines closer in, drawing a blank on all of them.  With an hour and a half to go, I had 82lb on my clicker, so made the swim killing decision to put another net in......  For the next 35 minutes the wind increased and made presentation on the only line I was catching over, virtually impossible, I went back on the 8mm pellet and had another small carp, a wait and then another one touching 10lb, the wind dropped in the last 25 minutes and I managed one more small carp on paste, before hooking and losing one (which trashed the rig) right on the death.

I had clicked 95lb, which proved to be unusually accurate, as with 4lb odd of silvers, most of which was the eel and another first, a lb+ Perch on paste, my total was 100.11, which I think was 7th on the day, not managing a pick up, due to the quiet last hour and a half - a total contrast to the last couple of matches I've fished.

I didn't get the results, so it's Tony Rixons blog for the full details, but Craig 'Trigger' Edmunds won with 160ish, Des Shipp was second with a high 140 and Scott Puddy was third with a lower 140.

Most bites and fish of the day went to Dave Haines, who weighed in 23lb odd of tiny silver things, smaller than the lumps of paste I was using, he must have been busy!!!
Posted by Chris Fox at 21:50 No comments:


I was disappointed when I drew peg 17, its a peg that I have failed miserably from every time I have drawn it, I have won and framed from all the other three banks, but the 'top bank' 16-20 hold some voodoo over me. Still, attack the peg and maybe all that could change, I was convinced there would be a few fish caught up in the water. I hadn't reckoned on the wind, which was left to right across my peg, making it impossible  to control a pole at 13m, let alone the 16m where I felt would be the place to catch. I had three fish shallow, before even 13m became too difficult, 7m being about the best I could manage.  True to form, I struggled on this peg, only catching late, a few fish at 5m on meat for 55lb.  It was frustrating watching guys on the car park bank fishing 16m and having the wind off their backs, but why should it come as any surprise that I draw the most wind affected peg on the lake.  another day where it was too little to late.

My first time fishing a MFS match and they seem a friendly bunch of guys.  I wasn't too concerned where I drew, I had 8mm pellet and meat, with some paste as a stand by, but for me it hasn't worked on Campbell this year, I had also picked up a loaf of bread, just in case......  Peg 116 came out of the dustbin lid (used in lieu of a cap, as non of them looked too hygienic).  I'd rather have had 115 as it sits further out in the lake, but it should still produce some fish.  Ken Rayner was on 119 and I had Mark Poppleton on 115 for company.

I set up a lead rod, two wagglers one full depth, one shallow, although it is difficult to catch on the shallow wag now, unless you have an end bank to cast to.  A  margin rig, a shallow and full depth pellet rig and a meat rig for a line about 6m.  Starting on the waggler at depth, I managed 4 fish in the first 30 minutes and then the wheels came off, the bites on the waggler stopped, I tried the pole shallow and depth with pellet, to no avail. The 6m meat line was full of roach and rudd, pecking away at 8 or 10mm meat, as was the margin, I had one small carp on meat from the margin and was now falling behind Mark Poppleton who was taking odd fish shallow on the pole, but out beyond where I could reach.

I switched to feeding 8mm pellet in the margin and a new 5m line with pellet to the left of the meat line, it took a while, but I had a run of fish from the margin before it went quiet and then had a bite every put in on the 5m line for the last 40 minutes. My fish went 107lb odd, should have been a little more, but was slightly over in my first net, I seriously misjudged the weight of those fish, as I had clicked 55lb!!!

With hindsight, I should have left the meat at home and just fished pellet all day, but even given that, the virtually barren 41/2 hours cost me any chance of a pick up, this now seems a regular occurrence, I struggle until the last hour or so, when my catch rate seems to be bang on, shame about the rest of the match. 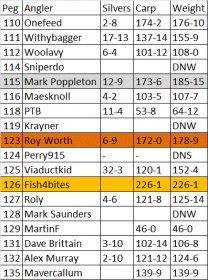