First match of this enjoyable league, I'd happily fish many more matches as float only.

I am having a nightmare run at the moment, some poor draws, but I seem to be shot of confidence in making a method or bait work, so am getting nowhere near the best from pegs at the moment, hopefully today would be a good chance to reboot and get back on track.  The draw was a good start, 112, narrowly pipped for the section and lake win by Steve Shaw on 110 a few weeks back, an enjoyable day catching on the waggler and then a few short.

There were quite a few fish spawning round the lake, so I was wondering how it would fish, first job was to set up full depth and shallow waggler rods, then full depth and shallow pellet rigs, meat rig, edge rig and in case the sun came out, a mugging rig.  There was time so I set up a paste rig - too much stuff, evidence of my uncertainty and loss of confidence I guess.

Started on meat short and had a 10lb fish first put in, great start, then the wheels came off.   Lost a foul hooker on the meat and then it was getting ragged by shit fish and even a 10mm piece of meat was getting whittled down until a 2oz roach could get it and the hook in its mouth.

A switch to the waggler and I was expecting a few fish, its a method I enjoy and would back myself on, well not today, I didn't have a bite on it.

I spent the rest of the day being well and truly chip-shopped, as I switched from long pole and pellet, meat short, worms down the edge, pellet shallow and failed quite spectacularly to catch, whilst Phil opposite and Paul next to me were catching on pellets, I had a couple on Burts 8mm polony pellets on the deck, had a few liners so picked up the shallow rig, fish first drop in, but that was it, just typical of my matches at the moment, make a change, catch a fish, but then fail to take more off that line.  Had one on paste, but no other bites on it.

Probably last in section, as no one seems to be able to be honest about their weights and I left before the section was finished weighing in. One of those matches where I left thinking, what the **** just happened, I really should have stuck to trying to make something work, rather than chapping and changing.  Well done to those worked it out.

Back to Viaduct tomorrow, going to cut down on my choices by just taking pellets. 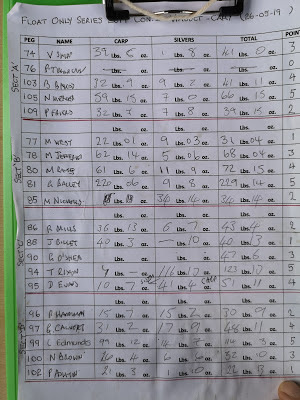 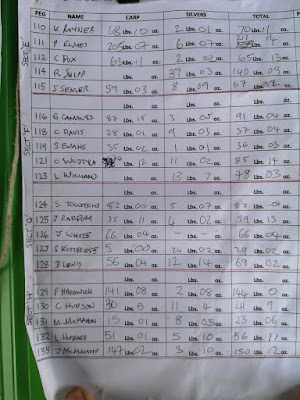