Just a small match today, not more than a knock up in reality, with 12 on the Match Lake.  I fancied it for a few bites, as this lake is one where you can usually work at it and catch off a few different lines.

Into the draw tin and 51 was my reward, I don't draw that side often and it has often been the better side for F1's on the occasions I have fished this lake, so not too disappointed with the draw, although with Ben Hagg on 40 with a bit of room, I wasn't going to bet against him. 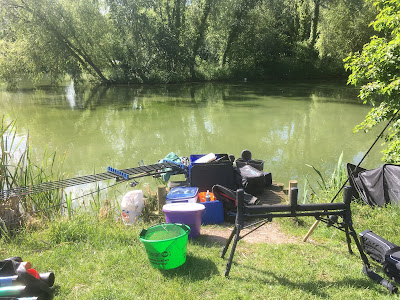 I was still wary of setting up too long a pole after last weeks agony and it wasn't much better, but smothered by pain killers, I did get 14m out, if I could get regular bites at that length it wouldn't be too bad, its sat holding it waiting ages for a bite which hurts, not the shipping in and out.  I was hoping to catch at 5 and 7 joints though.  Also set up a feeder and a waggler, expecting to catch on both to the island, even more so when I played a fish all the way back from the island, whilst clipping up the waggler, before it came off - solid!! and several let me know.

Before the start had a chat with Ben and he was telling about how he'd been round the lake in the boat and found some hard spots, one in my peg at 16m - well he might as well have said it was on the moon, I wasn't getting that section out -  especially for a 12 pegger.

Started on the waggler and had a disastrous wind knot at the reel on the second cast, I tried unpicking it, but no chance, so had to set that up again. It took 40 minutes before I had a fish on it, a 2lb F1, I had started by not feeding anything, but the pinged the odd 6mm Burts feed pellet across, but no more bites forthcoming.  I tried the feeder, with just micros, micros and GB, finally just GB, to no avail, not a bite.

It was fishing hard, I tried the pole at 7 joints, fishing Burts sweet F1soft hookers  over micros, this brought some bites, but it was 1-2oz skimmers, no point, not going anywhere with them.  Ben was catching odd fish at 16m alternating between slapping and on the deck, so I ventured out to 14m and had an F1 straight away, then a decent skimmer, but that was it, no more bites.  Back on the waggler and another carp, but the wind was making it tricky and I ended up losing a float - I hate doing that.

I ended up fishing 6mm meat for the last hour and had another carp and F1, along with a few skimmers, that's the hardest I have known that lake fish, it was tough going.  It was frustrating watching Jack on 47 landing small carp or F1's and putting them straight back as he was fishing for silvers, he should have framed!

One more fish, or maybe getting that 16m section out might have propelled me from 5th to 3rd but I don't think I could have beaten Ben's 60lb on the day or the 40lb that was 2nd, the methods I was banking on just did not work.  Fair play to him.  Maybe with hindsight I should have fished for silvers, the skimmers wouldn't settle on the bottom, but they were catchable had I targeted them, still couldn't see the point on that peg or on a 12 pegger. 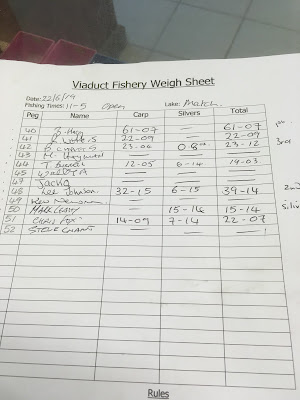